That’s the term Sue Klebold uses when discussing anxiety, depression, and related issues that afflict so many of us.

She prefers “brain health” to “mental health” because she believes it reduces stigma by acknowledging “your brain is an organ, and it’s doing things that are not your fault.” 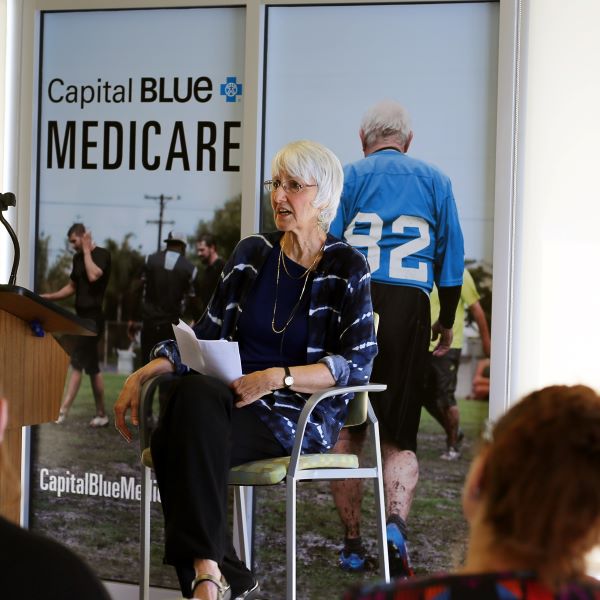 Klebold became an outspoken advocate for brain health and suicide prevention after her teenage son, Dylan, and a companion walked into Columbine High School in the spring of 1999 and killed 13 people before taking their own lives.

As part of our mission to educate and engage the communities we serve, Capital BlueCross hosted Klebold for a public discussion on September 16, 2019 at our Capital Blue health and wellness center in Enola, Pennsylvania. She also signed copies of her bestselling book, “A Mother’s Reckoning: Living in the Aftermath of Tragedy.”

Klebold’s message focuses on suicide because, as she learned too late, Dylan’s horrific actions at Columbine were motivated by a feeling of hopelessness and despair that led him to no longer want to live. Like many parents, she thought she knew her child well and was aware of the stresses in his life, but like many teens, Dylan quietly hid his anguish, even from those with whom he shared a home.

Fourteen months before the mass shooting, Dylan “had a cluster of trouble he’d never had before,” Klebold recalled, including damaging property, theft, and a suspension from school. She attributed his behavior to typical teenage recklessness and rebellion, failing to see what was behind Dylan’s erratic behaviors.

Dylan was in pain, she later learned, and was contemplating suicide. (Perpetrators of mass violence often are suicidal, Klebold said, so mitigating suicidal tendencies can be a tool to reduce violent acts.) Klebold regrets not asking her son questions that might have helped delve deeper into his issues and feelings. Though she thought she had a good rapport with Dylan, “I learned I was wrong. … And that is my deep, deep regret.”

Klebold’s advice for adults interacting with children—regardless of whether they show outward signs of struggling—is to make a simple request of them: “Tell me more.”

She also asks that everyone become more cognizant of brain health and stop treating the issue as something that only impacts other people.

“As I learned all too well, brain health isn’t an ‘us versus them’ situation,” Klebold wrote in her book. “Every one of us has the capacity to suffer in this way, and most of us—at some time in our lives—will.

“We teach our kids the importance of good dental care, proper nutrition, and financial responsibility. How many of us teach our children to monitor their own brain health, or know how to do it ourselves?”